Stay Close Behind Me! 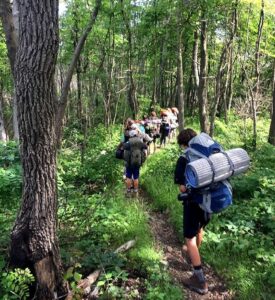 Once upon a time, I decided to take 30 teenagers backpacking on the Appalachian Trail near Standing Indian Mountain in North Carolina. I seem to remember Beverly saying I had lost my mind, but I was certain it would be fun. I was terribly mistaken.

To get to our campsite, we had to walk a mere 6 miles. And the cries began. Are we there yet? How much farther? Will you carry my backpack? I’ll just stay by this tree and die. After several rest stops and threats of feeding them to the bears, we arrived.

The biggest problem was not the whining, but their failure to follow me…the only one who knew where we were going. Some ran ahead, others fell behind, a few wandered off the trail, even as I yelled, “What part of stay close behind me do you not understand?”

How we see Following Jesus defines us. 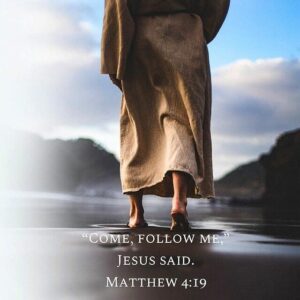 Sometimes it’s very important to actually follow someone. Backpacking on a trail. Sidestepping a rattlesnake. Avoiding a bear. Running out of a house on fire. (Yes, I’ve done all of that.) But what about following Jesus? Is that as important to us?

Jesus mentioned following Him 20 times across the Gospels. Almost every time, what is poorly translated as Follow me, are the words Akoloύthei moi. The meaning is “Accompany me on the road,” often more an offer than a command.

This is what Jesus said to Matthew, Philip, the rich young ruler…to the Twelve generally through instructions and warnings…to those with excuses for not accompanying Him. And He used this phrase in describing His sheep and those who serve Him. 1

How we live Following Jesus defines Him. 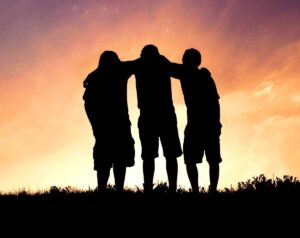 But twice Jesus used a different phrase…Opísō mou. Also translated as Follow me, it has a more direct meaning…Stay close behind me. This is a command, the one He gave Peter when he and Andrew were fishing, to the Disciples after Peter rebuked Him, and to a crowd that included Peter to make it clear that following Him was not just being on the same path, but staying close behind Him. 2

In each instance Peter was there, and I know why. Peter was emotional, rash, and stubborn. Sometimes he ran ahead of Jesus, sometimes he fell behind, and sometimes he wandered off the path. Just like each of us have done at times.

So where are you? Do you simply accompany Him? Are just along for the ride? Or do you strive to stay close behind…watching His every step and turn…keeping your eye on the only One who knows the way and where the path is headed?

Pictures: Banner Photo: Teen Expedition, Outward Bound. 1st Photo: On the Appalachian Trail, The Living Earth School. 2nd Photo: From the book cover of My Father’s Business: Making the Most of His Must by Brother Bennie, published May 15, 2020. 3rd Photo: From the cover of Love Like Jesus by Kurt Bennett, GodRunning.com.